Ladies (and gentlemen), if you ever get the brilliant idea to start a nail blog, make sure you don't start it just days before the holiday season kicks in and you have three major papers to turn in for grad school.  Otherwise you'll end up like me with almost a month between your first and second "real" posts.

So, day two is supposed to be orange nails, and I have a few photos of Del Sol's Sun Kissed.  In theory, Del Sol is the coolest nail polish out there. It's UV-activated so it changes color in sunlight! I first heard about Del Sol products on my first cruise in May 2009, but I thought they just had color-changing T-shirts so I didn't even visit their stores.  In 2010, though, my husband and I brought my parents on a Caribbean cruise with us, and they wanted to hear the shop talks, and lo and behold, the shopping director had Del Sol nail polish! He showed off Ruby Slipper (which I'll show you later on), and it just blew me away.  I got a few Del Sol polishes at their shop in Nassau, Bahamas, including this one: Sun Kissed. 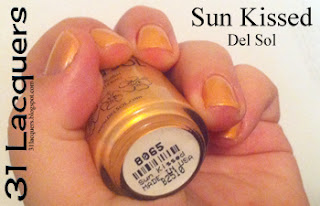 Like I said, in theory, this stuff should be the most awesome nail polish in the world -- and some colors are -- but Sun Kissed is a major dud.  It starts off a pale (and I mean super pale) orange color inside (see image above).  I have to use at least three coats, and it's still too translucent for my tastes.

The top of the bottle shows a bright red color as the UV-activated shade, but again, not on my nails, or at least not from my bottle of Sun Kissed: 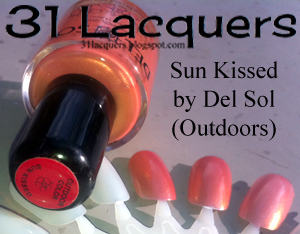 That's outside in full sun.  The bottle cap shows a red color, but the best the polish and the painted nail wheel will do is a darker orange than when inside. You could call it tangerine, I guess, or coral, but that's as close to red as it gets.  The nails on the nail wheel are three coats, two coats, and one coat.

Anyway, this bottle of orange polish makes me mad every time I use it. Even when I tested it in full Caribbean sun in the late spring, the best color change I got was from pale, boring orange to slightly darker, slightly pink coral. However, my other Del Sol polishes work well (especially that Ruby Slipper one I linked to earlier). I'll show off a few more Del Sols as the colors come up.

Do you have any funky color-changing nail polishes, either by Del Sol or Claire's (which has those "mood changing" polishes)? Do you have better luck with them than I do?

Posted by Tonya Kaushik at 8:05 PM