Since y'all don't know me in real life, you probably aren't aware that there are two things I really enjoy: random internet stuff and kitty cats. So when I happened upon Nyan Cat, it was a match made in heaven!

I knew I had to do a Nyan Cat design for the first rainbow challenge, but I had no idea it would be as difficult as it was. The final manicure ended up being a hot mess, which was a shame because I really wanted to wear this for a few days. Instead, the stupid thing ended up peeling off my nails the very next day.

Here's what I did. First, I used my Sally Hansen Nail Art Pen in white to dot out the areas for the rainbow to make sure I had enough room for all the colors. I also drew in an area for the cat, but instead of drawing him like Cute Polish or Professional DQ and others have, I turned the kitty on its head. ;) 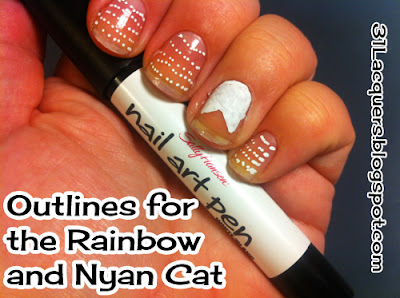 Unfortunately, I kept messing up the Pop Tart so I ended up removing the outline. I moved on to the rainbows. I used the following colors: 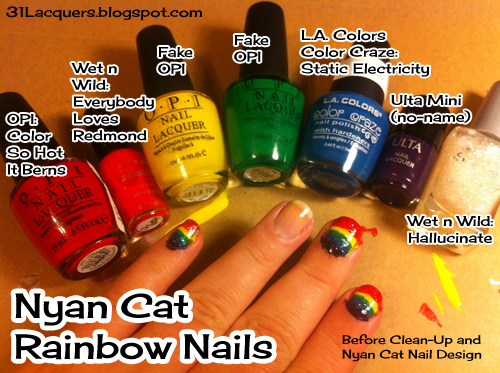 I wish I would have had some acrylic paints instead of nail polish because the colors went on too thickly and messily. I got so mad working on this design that I had to take a smoke break! But then I thought, "Holy crap, my nails are still wet so how am I going to light a cigarette? My hands will explode!" Grrrr. Anyway, that's what my rainbow mess looked like. I should have used a different orange since the two colors look too similar, making the yellow and green too bright; the whole thing looks more Rasta than rainbow.

What a mess. Like I said, the whole thing made me mad. After I (messily) painted in the rainbow, I mixed up some colors for the Pop Tart and for the cat. Here's what the final version looked like: 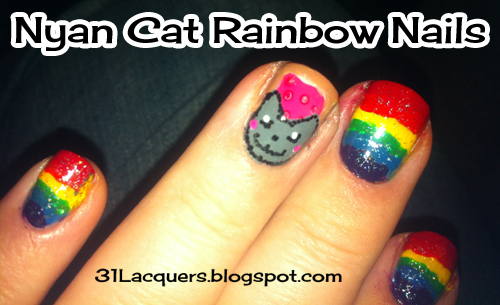 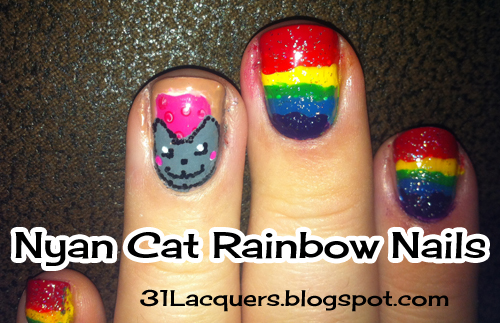 I used my Kiss Nail Art Pen in black to outline Nyan Cat. I used dots instead of solid lines to give it the 8-bit appearance of the original online graphic.

Anyway, what do you think? I love the way the cat looks, and I'm ok with the Pop Tart, but the overall effect is just blech. Blech, blech, blech, blech, BLECH. Working on this design reminded me why I prefer nail art stickers and stamping to freehand designs. I suck at it.
Posted by Tonya Kaushik at 6:21 PM